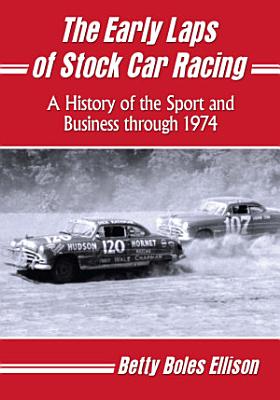 The first organized, sanctioned American stock car race took place in 1908 on a road course around Briarcliff, New York—staged by one of America’s early speed mavens, William K. Vanderbilt, Jr. A veteran of the early Ormond–Daytona Beach speed trials, Vanderbilt brought the Grand Prize races to Savannah, Georgia, the same year. What began as a rich man’s sport eventually became the working man’s sport, finding a home in the South with the infusion of moonshiners and their souped-up cars. Based in large part on statements of drivers, car owners and others garnered from archived newspaper articles, this history details the development of stock car racing into a megasport, chronicling each season through 1974. It examines the National Association for Stock Car Automobile Racing’s 1948 incorporation documents and how they differ from the agreements adopted at NASCAR’s organization meeting two months earlier. The meeting’s participants soon realized that their sport was actually owned by William H.G. “Bill” France, and its consequential growth turned his family into billionaires. The book traces the transition from dirt to asphalt to superspeedways, the painfully slow advance of safety measures and the shadowy economics of the sport.

Authors: Terry O'Neil
Categories: Sports & Recreation
This book focuses on the different aspects that contributed to the development of Northeast American sports car racing during the 1950s. The evolution from amat

Authors: Jerry Bledsoe
Categories: Sports & Recreation
On Labor Day weekend of 1972, journalist Jerry Bledsoe hooked up with the stock car racing circuit to begin research for his first book. The result of his effor

Authors: Stuart A. P. Murray
Categories: Juvenile Nonfiction
Which driver was faster? How long is each lap at a race track? How much faster are cars now, compared to the first race cars? Author Stuart Murray uses math to

The Encyclopedia of Stock Car Racing

Authors: Frank Moriarty
Categories: Sports & Recreation
Stock car racing is one of the fastest-growing spectator sports in the United States, both at the track and on television. Veteran journalist Frank Moriarity's