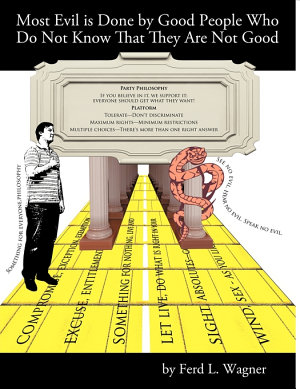 GET BOOK
Most Evil Is Done by Good People Who Do Not Know That They Are Not Good Book Description:

This book takes the view that Christian truth is the basis for all answers to social issues and that there are not two opposing but equal answers within Christian truth that are equally valid and equally acceptable to God. Any so called truth or "right" that circumvents or undercuts the required sacrifices, disciplines and self denial demanded by God in any given social or moral issue ceases to be truth, ceases to be right the moment it becomes a force unto itself, outside of or independent of the Scripturally required obedience. Human history has shown over the millennia that when the letter and spirit of God's laws are not obeyed, the truth is abused, nations become confused and people are used. Many of our political and social issues are rooted in our misplaced belief that tolerance, inclusion, equal respect for unequal truth and live and let live is the way to greater peace and prosperity. They are all wrong. Each individual, government and nation is judged by their response to Christ. The Christian nation or one which ascribes to being one, is tasked to set the Christian standard as every nation's point of reference. It is the Christian's duty to show that the valid rule of God's law, the letter of God's law and the spirit of God's law are superior to any other alternative standard. The biggest obstacle to Christianity today is the undisciplined, misinformed and unfaithful lifestyles of professing Christians. The Church has become so indoctrinated in its aversion to any form of discrimination that it has placed a higher priority on keeping the peace by compromising than by keeping the truth by discriminating. By accepting a false peace and rejecting a hard truth that resists compromise, it begets neither peace nor truth.