Assad or We Burn the Country 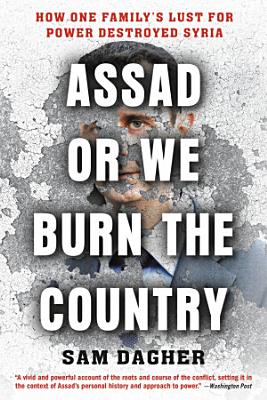 GET BOOK
Assad or We Burn the Country Book Description:

From a Pulitzer Prize-nominated journalist specializing in the Middle East, this groundbreaking account of the Syrian Civil War reveals the never-before-published true story of a 21st-century humanitarian disaster. In spring 2011, Syrian President Bashar al-Assad turned to his friend and army commander, Manaf Tlass, for advice about how to respond to Arab Spring-inspired protests. Tlass pushed for conciliation but Assad decided to crush the uprising -- an act which would catapult the country into an eight-year long war, killing almost half a million and fueling terrorism and a global refugee crisis. Assad or We Burn the Country examines Syria's tragedy through the generational saga of the Assad and Tlass families, once deeply intertwined and now estranged in Bashar's bloody quest to preserve his father's inheritance. By drawing on his own reporting experience in Damascus and exclusive interviews with Tlass, Dagher takes readers within palace walls to reveal the family behind the destruction of a country and the chaos of an entire region. Dagher shows how one of the world's most vicious police states came to be and explains how a regional conflict extended globally, engulfing the Middle East and pitting the United States and Russia against one another. Timely, propulsive, and expertly reported, Assad or We Burn the Country is the definitive account of this global crisis, going far beyond the news story that has dominated headlines for years.

Assad or We Burn the Country

Authors: Robin Yassin-Kassab
Categories: Syria
*Shortlisted for the Rathbones Folio Prize 2017*In 2011, many Syrians took to the streets of Damascus to demand the overthrow of the government of Bashar al-Ass

Authors: Hilly Moodrick-Even Khen
Categories: History
A unique collaboration providing an analysis of the conflict in Syria, focusing on the integration between legal and political studies.

Authors: Michael Weiss
Categories: History
Hardcover edition has a map on the endpapers.

Authors: Joby Warrick
Categories: Political Science
From the Pulitzer Prize-winning author of Black Flags, the harrowing true story of the mission to find and destroy Syria's chemical weapons and defeat ISIS - on

Break all the Borders

Authors: Ariel I. Ahram
Categories: Political Science
Since 2011, civil wars and state failure have wracked the Arab world, underlying the misalignment between national identity and political borders. In Break all

Authors: Kail C. Ellis
Categories: Political Science
This edited volume examines the importance and significance of the Christian population in the Middle East and North Africa from the rise of Islam to present da